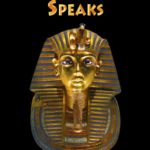 Long ago the old texts of ancient Egypt alluded to scrolls in which King Tut spoke to the people from beyond the tomb. Many archaeologists put this down to an incorrect translation of the ancient Egyptian texts. Others swore to the accuracy of the translation. But, Tutankhamen Speaks isn’t a story about the lost scrolls. It’s about the story written down on those ancient scrolls: Tutankhamen’s story.