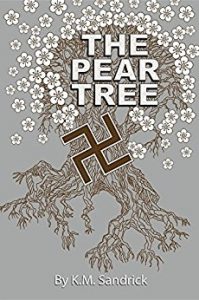 The Pear Tree begins on the day the head of Nazi-occupied Czechoslovakia, Reinhard Heydrich, was assassinated by Czech partisans. It describes the subsequent investigation that leads Gestapo to the small town of Lidice, the total destruction of the town, the interrogation of its women and children, and the forced separation of mothers from their infants, sons from their mothers, friends from friends. The book follows the paths of characters who wrestle with fear that they will never see their families again, that their secrets will be revealed, that they will never learn the truth. The book tells of the importance of the only living reminder of their town–a pear tree–on three of these characters: a young woman who mourns the loss of her son, her ten-year-old son who is forced to face the conflicts of war and occupation, and a thirteen-year-old boy who confronts Gestapo in his search of his mother.