Trauma, Shame, and the Power of Love: The Fall and Rise of a Physician Who Heals Himself 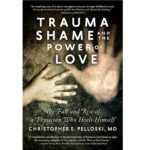 Bronze Medal Winner
2016 Global Ebook Awards
Non-Fiction
Autobiography/Memoirs
There is a reason books that recount the regrets and advice of the dying strike so deep a chord: people who have nothing left to lose can tell their stories with a sincerity and unpretentiousness we crave but that is all too rare. In Trauma, Shame, and the Power of Love, Christopher Pelloski relates his own downfall from a prominent physician-scientist in the field of radiation oncology in a similarly candid way.
Without fear of losing society’s good opinion—having lost it already—Pelloski has the freedom to be sharply honest in his observations of himself and the world around him. To the question “Why would someone with so much going for him risk, and then lose, everything, by sinking so low?” he offers a gut-wrenching, soul-baring answer that dissects his decades-long downward spiral and examines it from perspectives that range from the historical to the molecular.
Pelloski chronicles the evolution of his devastating legal battle alongside his concurrent journey of recovery from childhood sexual abuse. He shares with us the lessons he learned from these experiences in the hope they can serve as both a warning and an invitation: a warning to abuse survivors not to follow his dark path of silence, and an invitation to society to deal more openly with the multitude of painful issues that have shaped not only his life but also, tragically, the lives of so many others.
Those brave enough to set aside their prejudices and preconceptions will be richly rewarded and challenged by this work.
Get Your Copy Here
Author’s Website