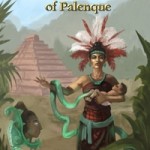 The ancient Maya city of Lakam Ha has a new, young ruler, K’inich Janaab Pakal. His mother and prior ruler, Sak K’uk, has selected his wife, later known as The Red Queen. Lalak is a shy and homely young woman from a nearby city who relates better to animals than people. She is chosen as Pakal’s wife because of her pristine lineage to B’aakal dynasty founders  ̶  but also because she is no beauty.

Arriving at Lakam Ha, she is overwhelmed by its sophisticated, complex society and expectations of the royal court. Her mother-in-law, Sak K’uk, is critical and hostile, resenting any intrusion between herself and her son. She chose Lalak to avoid being displaced in Pakal’s affections, and does everything she can to keep it this way. The official name she confers on Lalak exposes her view of the girl as a breeder of future rulers:  Tz’aabk’u Ahau, the Accumulator of Lords who sets the royal succession.

Lalak struggles to find her place and prove her worth, discovering that she must also win Pakal’s love, since he is smitten by a beautiful woman, now banished from Lakam Ha by his mother. Pakal’s esthetic tastes dampen his view of his homely wife. Lalak, however, is fated to play a pivotal role in Pakal’s mission to restore the spiritual portal to the Triad Gods that was destroyed in a devastating attack by archenemy Kan. Through learning sexual alchemy, Lalak brings the immense creative force of sacred union to rebuild the portal, but first Pakal must come to view his wife in a new light.

In modern times, ten years after the discovery of the Red Queen’s tomb, archeologist Francesca is studying new research about this mysterious royal woman in Mérida, Mexico. She teams up with British linguist Charlie to decipher an ancient manuscript left by her deceased grandmother. It provides clues about her grandmother’s secrets that send them to a remote Maya village, where they explore her family’s links to ancient Palenque.