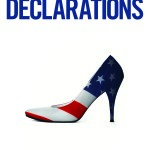 Ripped from today’s headlines, PRESIDENTIAL DECLARATIONS is a behind-the-scenes political thriller and an inspiring portrayal of a woman’s rise to the highest office in the land that gives readers a lot to think about when casting their votes in the next presidential election. Ambitious, smart and one of Washington D.C.’s power elite, Samantha “Sam” Harrison’s entire political career, once seemingly unstoppable, is in question and her loyalty to her country is about to be tested as never before. Washington, D.C. sustains the worst terrorist attack in American history, and the President of the United States needs Sam to serve her country once more. Political rivals on opposite sides of the aisle, Sam and the president have never agreed on deeply dividing issues. While Sam realizes that it’s time to put aside political differences, get justice, and help the nation to heal, she’s not sure whom she can trust. Leading the country out of chaos could put the White House once more within her grasp, but will place Sam, her daughter and her daughter’s first child directly in harm’s way. Sam’s actions in the coming days will decide her family’s survival, her political future, and the fate of the United States of America. The stakes have never been higher.