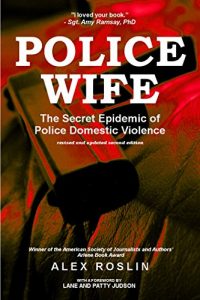 Awards for the 2nd edition of Police Wife:

“5 STARS…. SHOCKING…. EYE-OPENING…. You will find yourself shaking your head in disbelief more than once…. Could save a person’s life.”
– Viga Boland, Reader’s Favorite review
“I LOVED YOUR BOOK…. This is a book that should be given to the wife or girlfriend of every single male police officer.”
– Sgt. Amy Ramsay, PhD, Ontario, senior police policy analyst, former president, International Association of Women Police
“EXCELLENT JOB…. An important read.”

“AMY’S STORY MIRRORS MINE IN SO MANY WAYS…. All of us associated with this profession must make it clear that domestic violence will not be tolerated in our ranks.”
– Deputy Chief Dottie Davis, Retired, Fort Wayne Police Department, Indiana

WE CALL THE POLICE HEROES. They’re the ones breaking up fights and putting the bad guy in jail. But what happens when they go home to their families? Journalist Amy Morrison lived another side of policing in her marriage to a violent, controlling cop who drove her to the brink of suicide.

In Police Wife, Morrison and other police wives share their gripping and inspiring survival stories with award-winning investigative journalist Alex Roslin as he takes you inside the tightly closed police world and one of its most explosive secrets: domestic violence in up 40% of police homes, which departments mostly ignore or let slide.

Now in its updated and revised second edition, Police Wife gives a rare front-seat look at the amazing struggles and courage of abused police spouses worldwide–from Los Angeles to Montreal, Puerto Rico and South Africa–the ordeals of a handful of intrepid cops trying to change policing from within and why the abuse is an epidemic, one that may be getting worse.

We learn that police officers commit up to 15 times more domestic violence than the public. But most police departments don’t fire an officer even after a criminal conviction for domestic violence. Officers in some departments are disciplined more severely for stealing or lying than for assaulting their wife or girlfriend.

Police Wife, the first investigative book on the epidemic and a finalist or winner in nine book prizes, shows how abuse in police families affects us all and is closely linked to botched responses to 911 domestic calls at other homes, police killings of African Americans, police sexual harassment of women cops and young female drivers at traffic stops, and growing inequality in our communities.

ALSO READ ADVICE for survivors, friends and family and recommendations for change.

LEARN MORE or connect with the author at his blog PoliceDomesticViolence.Blogspot.com and the Police Wife page on Facebook. Available on Amazon in paperback or on Kindle.