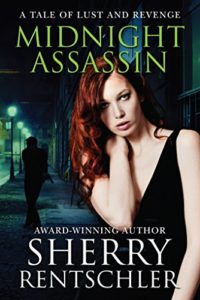 Terry Mastriano and his twin sister, Tempie, have become reluctant assassins, swearing a blood oath to avenge their father’s assassination. The target? E. “Needles” Puzzoli, a man who went to prison but not for their father’s murder.

For eight years, prison kept Needles safely out of the twins’ reach, but now he’s out and planning to leave town. If the twins want revenge, they must act now. Complicating matters is a mysterious and beautiful redhead who makes a prior claim on Needles. When Tempie attempts to kill Needles, the strange woman attacks, and warns both twins to stay away or die.

Terry figures they’re in a race with another assassin but he’s only half-right. The dangerous woman is so much more than a fellow killer—she’s a sensuous, deadly vampire with an undisclosed connection to both Needles and the twins. In an added complication, the vampire displays a lusty, predatory interest in Terry.

An unexpected event forces Terry into a bargain with the vampire. Honor and vengeance demand satisfaction, and the twins are out for blood. No matter who gets to Needles first, a debt will be owed. Blood always wins. Just ask the vampire.