It Rises From The Pee Dee

It Rises From the Pee Dee by Sara Marie Hogg is a work of historical fiction that centers around the dangerous activities of John McBride during the American Revolution.   He is a normal young man living a good life with his parents, sweet on a young girl, when he finds himself swept up in the drama of impending war and enlists as a ranger, scout, and spy in the North Carolina Regiment of Militia.  It Rises from the Pee Dee received a first place award in the ETWG First Chapter Competition, 2016. 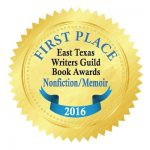