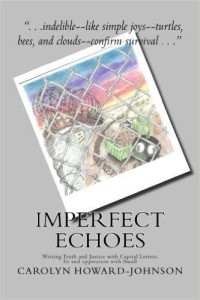 Inspired by Nobel Prize winner Czeslaw Milosz’s poem “Incantation” that lauds the power of human reason over the reoccurring and seemingly insane political realities, Howard-Johnson holds out hope but is not persuaded by trends that seem worse now than they were in Milosz’s time. A student of  Suzanne Lummis, UCLA poetry instructor and the Fresno School of Poetry fronted by US poet laureate Philip Levine, she touches on the isms of the world–racism, ageism, even what might be termed “wallism” but was once referred to as xenophobia.  In her poem “Crying Walls,” she sounds a low warning reminiscent of Robert Frost: “Chains linked. Wire barbed,/ Krylon smeared. Feeble,/ useless, unholy billboards,/ anything but mending walls.”