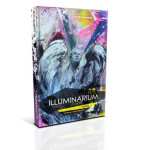 The novel is best savored without knowing too much in advance. In saying this what we will tell you is that Illuminarium is structured around a forensic psychologist named Harper who, while on a walk in the woods one day, happens upon a book. The pages draw her psychologically into another world, as she reads the life story of a character named York. The more she reads, the more she realizes that this book is far from ordinary. Before she knows it, her perspective on reality is adjusted to a new level of awakening, thrusting her at the forefront of an age old battle between good and evil.

I  began  to  live  within  my  continuum  of  potential  upon  awakening to  my  own  limitations  of  sight,  sound  and  an  altered understanding  of  everything  previously  believed  to  be  known.

Understanding  does  not  by  default  equate  to  truth  because perspective  will  always  be  a  relative  state  of  shifting  sands founded  on  our  limited  knowledge  at  any  given  point  within  a  spectrum  of  time.