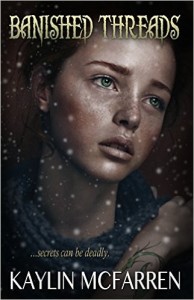 While vacationing at the stately Cumberforge Manor in Bellwood, England, Rachel Lyons and Chase Cohen attend an elegant dinner party hosted by her uncle, Paul Lyons, and his aristocratic wife, Sara. Before the evening ends, a priceless collection of Morris Graves’s paintings are stolen from her uncle’s popular gallery, throwing all suspicion onto his wife’s missing granddaughter. Determined to clear Sloan Rafferty’s name and, in the process, win Paul’s favor, Chase scours the countryside looking for answers. In his absence, the police accuse Rachel’s uncle of an unsolved murder and secrets surrounding her grandmother’s death and the deaths of Sara’s former husbands turn his wife into the most likely suspect.

With the true villains hell-bent on destroying Paul Lyons and his family, solving both crimes while ensuring her uncle’s freedom not only endangers Rachel’s life but that of her unborn child. Will Chase save them before the kidnappers enact their revenge or will the ultimate price be paid, as predicted by a vagabond fortuneteller?