A Course in Deception by Jana Rieger 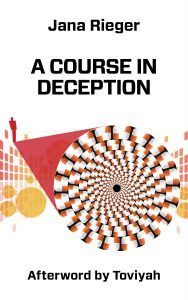 Researcher, Dr. Mackenzie Smith, is an esteemed sleep scientist who is thrown into a world of lies and deception after her research associate, Anbu Mathew, dies in a suspicious car accident. It happens on the same day that she has been summoned to defend some recent events in her laboratory. Without the evidence that Anbu had promised to get to her that morning, Mackenzie is left defenseless and all fingers begin point to Anbu.

After Anbu’s death, Mackenzie begins to find disturbing messages that he has left behind about the latest drug trial in the sleep clinic. Mackenzie vows to uncover what he so badly wanted her to know. What Mackenzie discovers takes her on a journey though churches, into police headquarters, and finally over to India, where Anbu’s family is waiting for her.

Link to the book trailer.