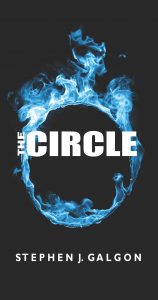 “…this book is groundbreaking. It’s such a unique fresh breath of air in the genre of thrillers that it breaks away from usual conceptions, acting as a palette refresher for the avid reader.” – Olivia Johnson, Book Blogger

IMAGINE YOU HAD ALL THE MONEY YOU EVER WANTED at the push of a button. The power to control law enforcement, politicians at the highest levels, the judicial system as a whole. To have what you want when you want it, whatever it is. All you have to do is kill someone… before someone kills you.

MEMBERS of THE CIRCLE don’t have to imagine such a life. They live it. The liberation of being both hunter and hunted. The salvation that comes with such freedom. A chance to feel truly alive. A chance to savor each precious moment. Because in THE CIRCLE any moment could be your last.

DOUGLAS GOODWIN isn’t rich. He isn’t powerful. What could the sacred society of THE CIRCLE possibly want with him—just a regular guy with a regular job leading a regular life? What would drive them to coerce a young man who has always valued integrity over hedonism into their midst? And why would Doug agree to submersion in a world of secrecy and murder? It’s unthinkable.

THE HARSH REALITY? Doug has been inducted into an institution where friends become enemies overnight, loyalty is a nothing more than a punchline, and conscience is a burden. Where he will be hunted and expected to hunt other members to their death. With no escape from THE CIRCLE’s ubiquitous influence and domination.

HOW FAR WILL DOUG GO? How much will he sacrifice to preserve his way of life? Will he be swayed by the money, the women, the power? Or will THE CIRCLE consume him, as it has hundreds of others before him, and leave nothing but another nameless corpse in its wake?