AT WAR WITH MARS 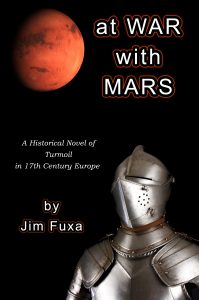 Astrology was the answer to everything – or was it?

Young Senno served two astrologers who prompted him to make lifelong choices that carried him headlong through central Europe in the 17th century.

Follow Senno as he stumbles into a great war to meet the famous and not-so-famous:
–  lovely daughters of a gifted astronomer
– an emperor determined to preserve his power
–  a warlord striving for peace amidst violence

Would Senno choose love over power? Could he survive the greatest battles of the age without turning coward? Would he escape burning at the stake with a witch? Should he betray the man who raised him from nothing?

This is the story of a would-be astrologer before and during the Thirty Years War, a story of struggles for survival and victory, for knowledge and peace.

A story of people  AT WAR WITH MARS